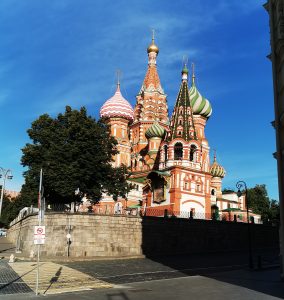 Part One While I was at a yoga resort in July, my friend Regis Tremblay, a peace activist and documentary filmmaker sent me an email. He’d visited Manita and Yuri, whose hostel I’d stayed at in 2015, in Sevastopol, the famous seaport and naval base, which has been part of Russia since 1783. Manita sent a video message, “We miss you…and remember the garden you promised?”. While there in 2015, I’d seen a patch of land that was unused, and strewn with weeds. So I’d suggested planting fruit trees there. I’d planned to go back in 2020, but Covid prevented … Read more 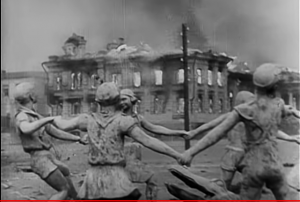 Except for the relatively small percent of those either drafted or enlisted in the Wars of the West, which are wars fought far–very far–from the borders of the United States, most Americans from the US have little direct experience or understanding, of what it is like to be invaded.  And interestingly, when opposition to the many US wars takes place, it is often in terms of how many of ‘our’ people die, compared with how many of ‘the Other people’ die following our ‘export of freedom and democracy’–usually in ratios of hundreds of theirs to one of ours.

What follows, hopefully, will give the reader some idea of what war was like, as experienced by the people of Stalingrad specifically, and the Soviet people generally.

As some of the following pictures will show, Volgograd is a very important city historically. It was originally known as Tsarytsin, but changed the name to Stalingrad, since the city was built under Stalin’s leadership into a major industrial center during the 1930’s. As a key junction on the Volga River, which is Russia’s most famous river, the Nazis and their allies tried to capture it, cutting off the rest of the Soviet Union from critical resources such as oil, based in the South.

This city was renamed based on the fact that Joseph Stalin, the Soviet leader at that time, wanted it to become the model of a Soviet city.

The Nazis hoped to capture it, go past it, and then attack Moscow from the rear. To that end, the German military conceived the idea to capture Stalingrad. The battle for Stalingrad went from September, 1942 until February 3, 1943. Axis (Germany, Italy, Hungary, Romania) forces lost 900,000 soldiers, while the Soviet Union lost 1.5 million!

However, both Franklin Roosevelt and Winston Churchill recognized the first major victory in the war against Nazi Germany to be the pivotal turning point in the war. That is its significance and why I felt impelled to visit and pay my respects, just as FDR and Churchill paid theirs, (conveniently forgotten by both the USA and the UK today).

Here is a modern documentary about the Battle of Stalingrad, made in post Soviet Russia. Below is a joint US Soviet 1970’s production narrated by actor Burt Lancaster. Both give good context for the importance of that event, and why I was determined to go there. It’s good to see the same event from more than one perspective.

Arrival in Volgograd and Visit to Mamayev Kurgan

One of the most contested areas was a hill called Mamayev Kurgan. It’s said that there were so many bullets and shells there after the war, that nothing could grow there.

I arrived in Volgograd midafternoon on August 17th, from Moscow. I had ‘met’ Dmitri Zaykin, through the online App, Couchsurfer.

I should give a shout out to Couchsurfer. It helps travelers and hosts meet each other online, get acquainted, and if possible the traveler gets to stay at the home of the host. The two great advantages of Couchsurfer are that it:

Here is a photo of my friend, Dmitri, his wife, Svetlana, and their son Stas.

I don’t know whether I am just lucky, or people on Couchsurfer are the best, or what, but Dmitri was a great help and a great friend. He’s a manager for an IT company team. So, when I noticed that my mobile phone battery was dying, he knew a company that replaces batteries. I had thought it wasn’t even possible. So spending about $25 on a new battery may have saved me the cost of $500 for a new phone! Here he is with wife Svetlana and son, Stas.

That evening, Dmitri took me to the iconic statue of Mother Russia defending the country, and the stunning memorial park. Here are some night shots of that excursion: 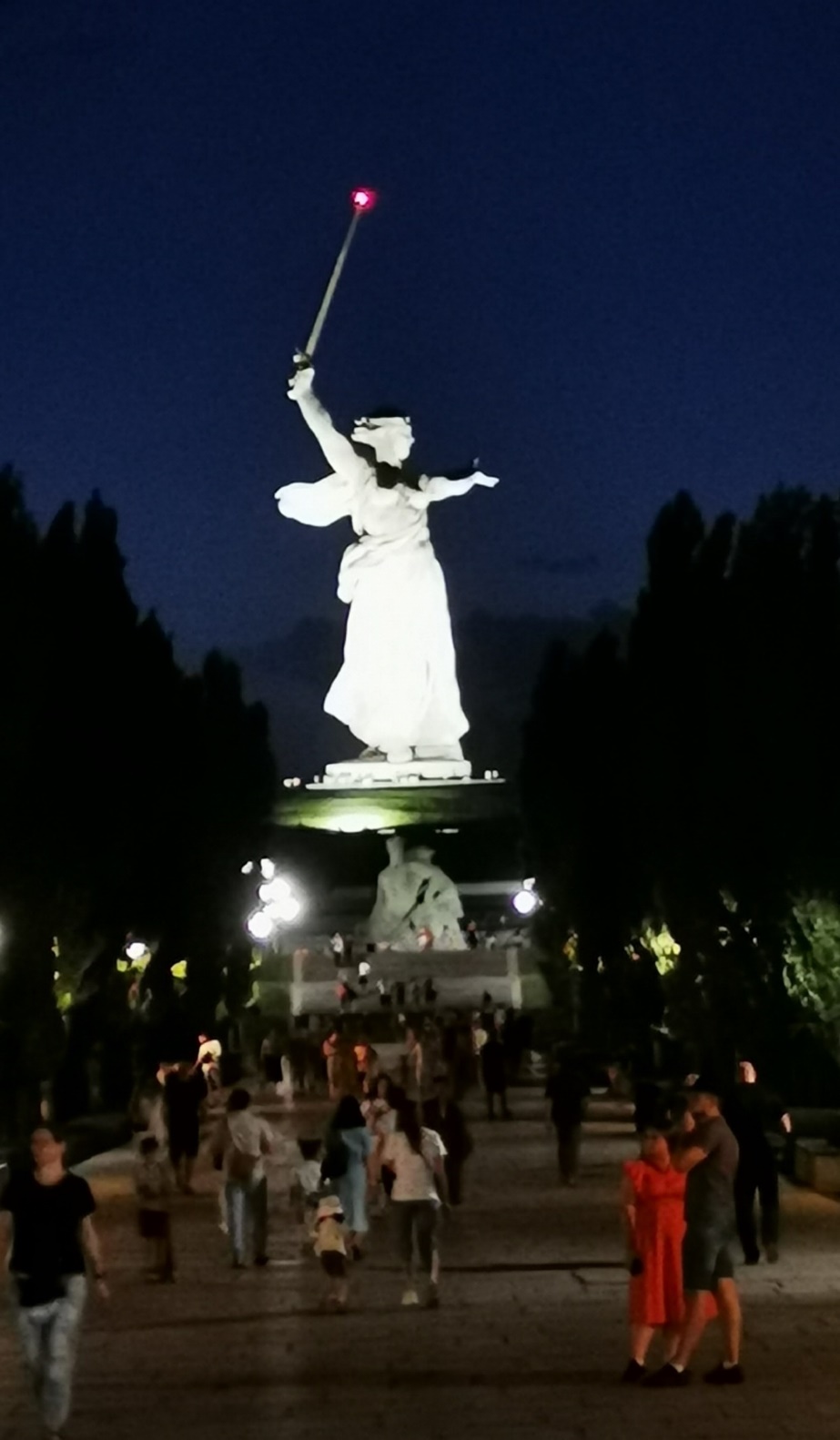 The memorial park has a lot of visitors. Even at night time. Of course, in August, the weather is warm so that may be part of why there are so many people. But the larger reason is that MOST Russian people, not necessarily all, have a deep sense of historical memory. WWII for them was not just another war, it was The Great Patriotic War, when the very existence of the Russian and Soviet people was on the line.

You see, Hitler’s plan was to, basically, do to Russia what the US did to the Native Americans: kick them off their land, enslave or slaughter them.  Hitler even justified his invasion by comparing it to the slaughter of Native Americans.

History reminds us that Nazi Germany intended to permanently destroy Russia, regardless of whether it was capitalist, communist, or tsarist. Putin is still using those narratives today to explain why he thinks Washington is a threat to Russia’s peace and security….General Franz Halder, the head of the German army’s general staff, wrote in his diary: “To dispose fully of their population,… “The Fuhrer is fully determined to level Moscow and Leningrad to the ground,”… 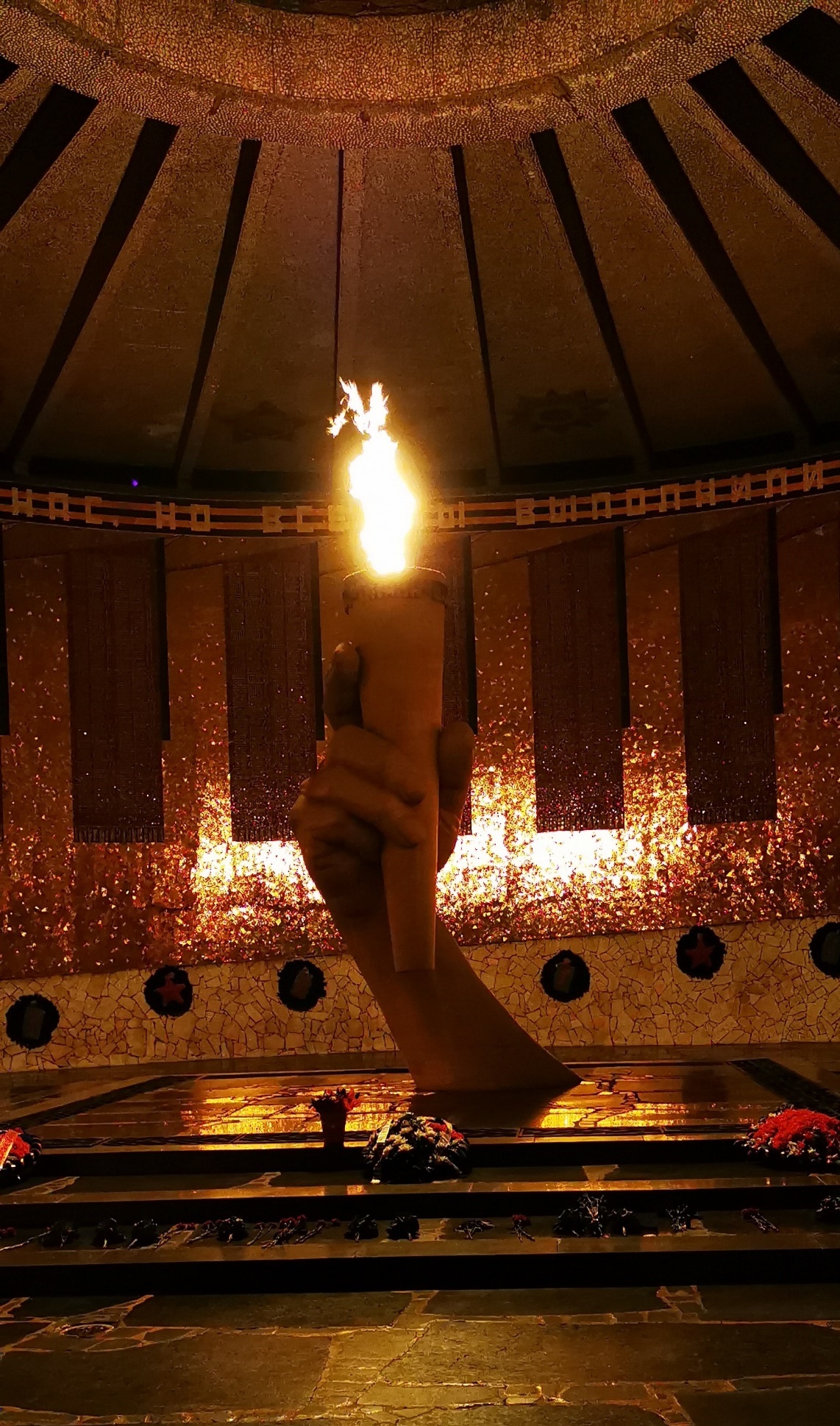 The Memorial Hall at Mamayev Kurgan

The Memorial Hall shows the names of the million or more Soviet soldiers who died there, inscribed on the walls.

Here are some of their names. If Hitler had captured Stalingrad, and the Soviet Union had fallen, the Nazis would have certainly then captured London and the UK, taken over most of Asia and even threatened the United States. These men and women saved our lives!

As the video above points out, most of Stalingrad was razed to the ground. The Soviet resistance was dogged. One of the few buildings left standing,was held by Soviet soldiers. Here is a photo of the building, preserved for historical memory.

Another building that was almost totally destroyed was named after the commander who defended it. It’s said that Pavlov held out holding this building longer than France as an entire country held out.

This is a good short explanation of the significance of Pavlov’s House.

Here I am in front of one of the most famous statues, that of a Soviet Soldier. He looks almost like a superhero, but the war was fought by millions of ordinary young people in their teens or twenties. The losses to Soviet and Russian society were staggering. Yet, in less than 20 years, they put the first man into space.

Why Historical Memory is SO Important

It’s been 81 years since World War II began. Most of us don’t think about it very much. But for Russians, this was not just another war, it was The Great Patriotic War. The US lost 400,000 dead. That’s a lot of course, and nothing to be happy about. But Soviet Union lost about 27 million, or 67 times more people.

Pearl Harbor and September 11,2001 each saw the loss of 3000 people in the attack on the United States. The invasion of the Soviet Union killed 19,000 people  PER DAY for 1417 days straight. So Russian people take threats to their country VERY seriously. Here is a song written early in the war, called The Sacred War.